​“People singing together.”  Wellington Community Choir aims to provide all people, whatever their background or ability, an opportunity to sing together.
More than 3,200 people have sung with Wellington Community Choir since it started. Usually we have at least 100 people singing together each week.
We cultivate the understanding that vocalising and singing joyfully together is natural and open to all, regardless of previous musical ability or experience.
For thousands of years all over the world, people have sung – to express joy, celebration and grief, to accompany work and devotion, and to aid healing. Song has always been a part of life and a way of binding communities together.

Music making can be an enormously powerful experience, as witnessed through the many wonderful musical traditions around the world. By sharing the music of different cultures at rehearsals and in performance, Wellington Community Choir celebrates diversity and promotes singing as a liberating and creative experience.

We are proud to be a community choir that welcomes anyone at any stage throughout the year. There is no requirement to read music, we do not hold auditions and there are no formal joining procedures. We run the Choir ourselves on a not for profit basis.

We do not sing competitively, but for the joy of singing.

We sing music from, or inspired by, different choral traditions from the world's cultures, including Aotearoa New Zealand.

We give performances at various community venues and events in Wellington and we also put on evening concerts. Here’s a range of our recent performances:
​We are a friendly and supportive community and have a lot of fun including trips to different destinations where we team up with other community choirs to hold concerts and workshops.

Music Co Director - Charlotte Kerrigan
​
Charlotte Kerrigan, B.A, GradDipTchg, is a musician and performer from the Kapiti Coast. Charlotte has been teaching choirs, glee clubs, rock bands, kapa haka, musical theatre and drama in schools for the last ten years, as well as teaching in classrooms as a primary teacher. She has also recently started teaching girls barbershop at Paraparaumu College.
Charlotte plays piano and sings with blues/jazz band Bluesette as well as performing her original music. Her debut album "Metaphor" was released in 2017 and entered in at #1 on the NZ Top 40 Heatseekers albums and #7 in NZ albums Top 40.
Charlotte's love of musical theatre led her to join Coasters Musical Theatre in Kapiti in 2003 and since then has performed, devised shows, directed and musically directed cabaret shows as well as big musicals including Little Shop of Horrors and Xanadu.
In 2019 Charlotte joined the Wellington Community Choir as assistant director working with Julian Raphael until he retired in August 2019, and has quickly come to love the welcoming and caring spirit that thrives amongst it's members. 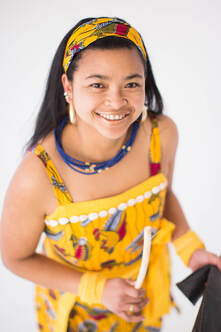 Music Co Director - Lala Simpson
​
​Lala Simpson comes from the musically diverse Island of Madagascar. She permanently moved to New Zealand in 2002 and has been involved in music making since she was a little girl. She has always enjoyed leading people of all ages to sing or dance and feels most at home when sharing her music.
She grew up immersed in the music and dance of her homeland and that of France, the Islands of the Indian Ocean and Africa. Lala speaks 3 languages fluently and applies her skills for learning a new language to learn songs from other cultures.
Lala runs regular open community singing workshop in Wellington and around New Zealand teaching her original songs and songs from other countries.
She is the director of the Manawa Ora Children Community Choir, a choir which seeks to build inter-generational and multicultural connections in the community by doing interactive singing in rest homes and public libraries, community spaces and events. She is also the director of Voices for Madagascar, a chorus that performs and records original and traditional songs from Madagascar and Kotaba Women’s World Music choir which is for women of all ages, background and abilities. She has acted as guest director for the Wellington Young Voices Choir, Angel Voices Choir, Gale Force Gospel Choir, Hutt Valley Community Choir and WOSOSI.
Lala also performs the songs of Edith Piaf and Jacques Brel and often performs at Festivals and fundraising events.
Lala has been described by those she has worked with as a compassionate, energetic, joyful, fun and patient teacher with a good sense of humour. 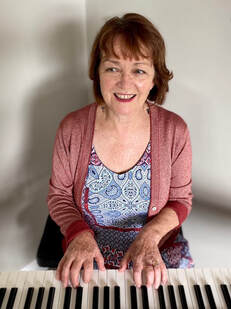 Growing up in a family where both parents played piano, Andrea developed a huge passion for music.  She sang in school choirs and orchestras and later played piano, flute and sang backing vocals in a variety of cover bands, soul and blues bands.
She has over forty years experience as a piano and flute teacher and more recently been working as a Registered Music Therapist, specializing in working with people with neurological conditions. Andrea’s portfolio also includes itinerant teaching, running ukulele groups and small orchestras in both primary and secondary schools in Wellington.  Currently she leads two community choirs in the Wellington region.
As well as working as a therapist and teacher, Andrea arranges music and plays piano in ‘Duke Wellington’, an 8 piece jazz band and occasionally plays in the Wellington City Big Band.